Well, it was something different,

To begin with, it was the process of strengthening the body - five non-cyclists suddenly putting their unconditioned limbs and lungs to work like never before. But as we became bike fit it became the searing heat, the hills, the saddle soreness and the paltry diet that such a tight budget inflicts.

And, being novices to the sport, we were doing it with too much gear.

Bike trailers were laden with unnecessary equipment and food.

On day 5 I remember setting up camp for the evening and discovering a three-liter can of pumpkin soup at the bottom of the trailer. We had been carrying it for four days.

This sort of stuff was happening continuously.

But maybe the greatest challenge was the headwind that constantly blows - West to East across the United States. It is notorious and well documented, and in this sense, it was one of our greatest planning oversights. The wind was relentless and completely infuriating. We would inch across a 100-degree Mojave desert, making a mile or two for the effort that would normally bring us ten. It was, and still is, my least favorite thing about cycling.

This particular challenge was underlined about halfway through the trip when we met Cheerio - a young Chinese cyclist peddling in the opposite direction. He was able to travel twice the distance we were able to in a day. And watching him ride off, with the wind at his back, it all seemed so leisurely.

After that encounter we hopped online to see if this would be our fate for the entire journey. Sure enough, almost every blog or website about pan-American cycling trips suggested going from West to East to avoid this headwind. But, just like Steinbeck’s Joad family, we were seeking out California and West we would go.

If someone to ask me what advise I could give for anyone considering a ride across America I would say, take a tent and seek out conversations and new experiences.

We left Sallisaw, Oklahoma with $420 and no plan.

Almost every day we were offered some kind of accommodations; somewhere to pitch a tent, the back of a wagon - even a hotel room, along with food and water and good conversation.

Be prepared to go it alone, but you’ll more than likely have countless friends out on the road.

Also, put some peanut butter on a tortilla and throw a banana on top. The most inexpensive, high octane fuel you can wish for! 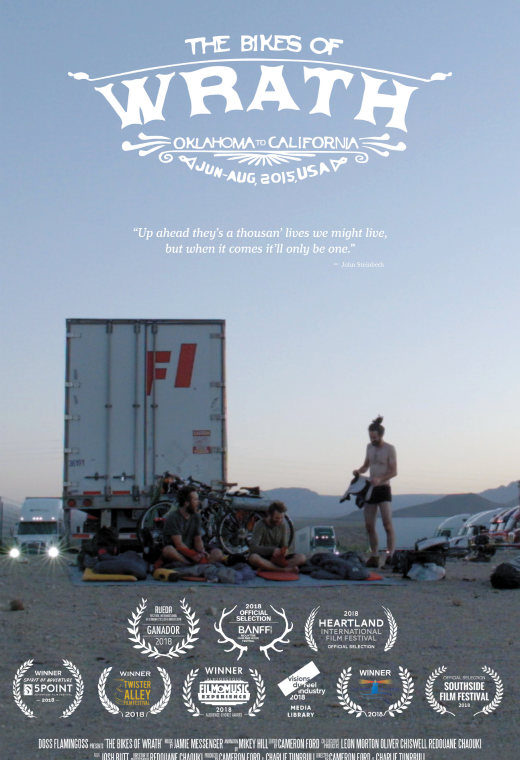