Looking for new cycling documentaries? Mamil is a must watch

MAMIL is more than just your average cycling documentary.

Cycling documentaries often feature the pros: fit men and women who dash at lightning speeds and pull off tight-fitting lycra suits as if they’re hot fashion.

But what about MAMILs? Seemingly out of nowhere, over the past decade, predominantly white, middle class and middle aged men have become the new face (and hard earned dad bods) of the cycling world. MAMIL: Middle Aged Men In Lycra.

Oh MAMILs – it’s as if you can’t sit at a cafe before 9am and not see a small horde of sweat-soaked greying-haired men sipping on their lattes. Yet remarkably, no film has ever been dedicated to the group.

This is where Australian cycling documentary MAMIL steps in. Traversing the globe, award-winning directors Eleanor Sharpe and Nickolas Bird speak to MAMILs from all walks of life, seeking to discover quite why there are so many Weekend Warriors on two wheels.

And there really are so many. Interviewing organisers and salesmen at the world’s biggest cycling expo in Las Vegas, viewers learn just how much of a massive industry cycling has become (six billion dollars annually in the U.S. to be more specific). And it isn’t the cycling professionals who are spending the big money and flashy bikes – it’s the working professionals who are forking out on an obsessive hobby.

MAMIL is any cycling enthusiasts perfect film. Whether you’re a MAMIL, a MAWIL (Middle Aged Women In Lycra), a DAPIL (Different Aged People In Lycra), this new documentary will leave you on the edge of your (bike) seats. And forget these awesome acronyms, you can also just love watching cycling content – or just stories about human nature, bikes not included.

What makes MAMIL such a good film about cycling?

That’s the result of a number of the documentary’s elements. For starters, the selection of characters are raw, relatable, and utterly engaging. We meet Australian Jayman Prestidge, the hyper-competitive President of Warragul Cycling Club, whose wins or losses dictate his mood for weeks. Richard Price from England, who emerges himself in the MAMIL world as a means of coping with – and perhaps even improving – his MS. The American Pastor Tim Turnquist, who deems cycling as his best way of getting close to Jesus.

And as that suggests, the characters get up to remarkable things. For example, Melbourne based barrister Doug Shirrefs ignores a crippling knee injury to venture to Spain in a quest to ride the notoriously challenging Col du Tourmalet. Along the way, we, the audience get to watch the spectacular climb with fantastic cinematography, as well as the live events of the famous Vuelta a España race, which Doug is also there to ogle.

Other characters use their inner-city cycling experiences to capture the brutality of the streets. With Go-Pros attached to their heads, these cyclists expose text-and-drivers, dangerous driving, and verbal and physical abuse – something any frequent cyclist can empathise with.

There are also the injuries. Boy oh boy, the injuries. This isn’t a sequence for the faint-hearted. If your partner is an avid-cyclist, you may want to switch to something more jovial (but also, don’t). A short montage shows riders from around the world detailing their many injuries: broken wrists, collar bones, concussions – the list goes on infinitely. We meet one man who, after a cycling accident, was left paralysed – which albeit doesn’t stop him riding his hand-peddle bike near-daily. Another whose body is a collection of deep scars from various, life-threatening cycling-related injuries. And we are there to watch as sixty year old President of Adelaide cycling group ‘Fat Boys’, Jim Turner, derails on a solo ride, leaving him with a crushed vertebrae – a broken back.

Remarkably though, this doesn’t deter the MAMILs. It maybe even achieves the opposite. Despite his wife acknowledging she’d “happily never see a bike again”, the first thing Jim Turner does when he is able to successfully stand after a month of lying down is work at gaining strength on his bike to rejoin his beloved Fat Boys. These men love cycling and the world it provides, and cling to it like any addiction.

Subsequently, the root of the MAMIL documentary is, why is it such an addiction? The answer is layered, but also fairly simple. For men grappling with greying hair and tiring bodies, cycling offers an injection of masculinity. It offers purpose. It offers a likeminded, equally struggling community to surround yourself with. It offers rejuvenation.

Luckily for you, MAMIL is available in cinemas at your demand. That’s because Demand Film run an on-demand screening service. Simply reserve an Australian cinema near you, and we will organise the screening for you. Call up your fellow-MAMILs and give it a go. 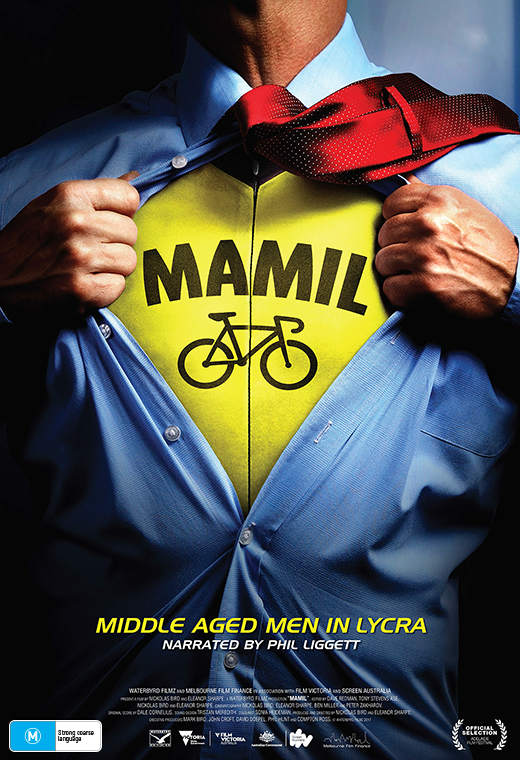